On Friday 17th June a Barnes coach full of bowlers and supporters left Highworth Bowls Club en route to Ilfracombe, North Devon. The rain started on the M5 in Somerset, and by the time the coach crossed the Devon border it was raining heavily.

We arrived in Ilfracombe just after midday and undaunted changed into Bowling Gear in readiness for our match at Ilfracombe Bowling Club that afternoon. The rain had eased for our arrival at the club where we were warmly welcomed by the Ilfracombe members. The match started and by the 10th end when we stopped for tea and biscuits conditions were not too bad. Soon after the restart the rain set in heavier again but we carried on with resolve and Highworth emerged wet but victorious at the end of the day. We then returned to our hotel to a well earned evening meal. 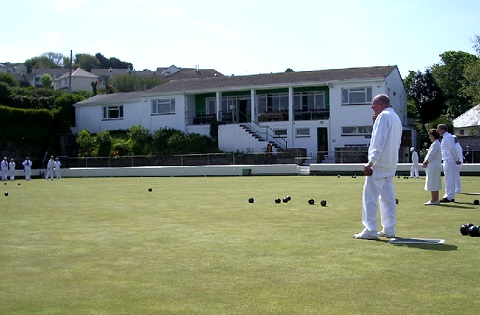 Saturday morning dawned cloudy and very heavy prolonged showers soon broke out. After a hearty breakfast we were taken by coach to Lynton and Lynmouth for a couple of hours sightseeing prior to our match with Combe Martin Bowling Club that afternoon. Our driver took us along the narrow coast road so we could see the spectacular coastal views, this involved negotiating some hairy hairpin bends with sheer drops on one side and there were times when the passengers were unusually quiet!

Lynton and Lynmouth are very pretty villages connected by a Cliff Railway and are well worth a visit. The church in Lynton was very interesting with some wonderful stained glass windows and an ideal refuge from the very heavy showers. It also contained a poignant memorial to the victims of the Lynmouth Flood Disaster. This devastating tragedy affected the lives of so many villagers and the ages of the victims, from an 8 month old baby to a lady in her 80s, and the fact that whole families lost their lives, really brought home how lucky we are to live on the hill of Highworth.

We set off for Combe Martin in the early afternoon and arrived just as the rain stopped. By the time we had changed it was bright and breezy and the sun was even threatening to come out. Combe Martin were very friendly and really keen. When “threes up” was announced it became obvious that they were not taking us lightly, evidence of County involvement also pointed to the fact that we needed to be “on our game” if we were to push them hard. We lost but they didn’t have it all their own way as we competed well. At least it stayed dry and the sun did shine at times. 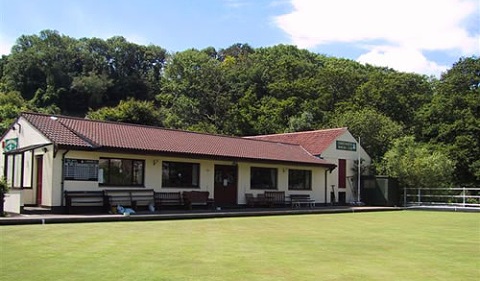 Then it was back to the hotel for another excellent evening meal and later a walk down to the nearby harbour for some of our party to see a spectacular fireworks display or refreshment at one of the hostelries which could be found in that area.

Sunday morning again brought rain. Mid morning we departed for Barnstaple for our match with Barnstaple United Services Bowls Club. The coach dropped us off at Green Lanes Shopping Centre in Barnstaple to allow some Retail Therapy for a certain section of our party, by which time the rain had stopped and the sun was out which meant the non shoppers could at least sit outside and catch some rays.

We were collected around 1-30pm and taken to the venue for that afternoon’s match. By this time the sky was blue and the sun hot so we were looking forward to the battle. The weather was so good a photograph was in order and duly taken as can be seen here. 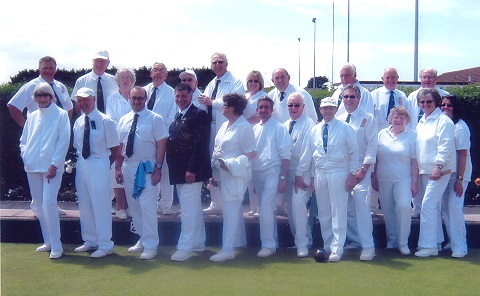 Again evidence of County involvement could be seen and Barnstaple although again very friendly were obviously keen to emerge victorious. Once again after a hard fought match Highworth lost despite our efforts and we returned sunburnt to the hotel for yet another good meal. 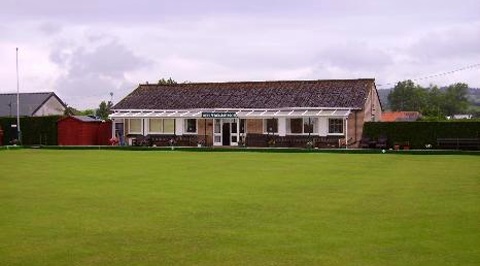 Monday the day of our return home started with warm sunshine and blue skies and our cases were packed and loaded on the coach ready for our journey home via Minehead where we were to play our final match.

The previous morning great hilarity had occurred while we were sat waiting to leave by a broken bathroom window in the hotel opposite or more particularly by what could be seen through said window. Still broken on Monday it was again being checked out when Danny our coach driver announced that we could not leave as the computer was indicating a problem with the coach. He contacted Barnes Coaches in Swindon who had a spare coach in Bude but this would not arrive in time to reach Minehead for our match so he was told to obtain a coach locally. This duly arrived, a school bus from Taw and Torridge Coaches to which we transferred with our bowls bags but with no room for our cases which stayed in Ilfracombe with our original coach. Even the problem with our coach failed to dampen our spirits as we were all having a great time as usual and our travelling in a School Bus caused much hilarity.

After yet another scenic coastal journey with superb views over to the Welsh coast and the ascent of Contisbury Hill and the descent of Porlock we arrived very early at Minehead Bowls Club who had been informed of our problem and had kindly arranged to open the club for us. We were able to walk into the town for a quick lunch then returned to the club to sit in the warm sunshine. By 2-30 when the match started it had clouded over and the rain soon followed, but determined to end the tour on a high we donned our wets and emerged victorious.

We adjourned to the clubhouse, and as we were still without a coach wondered if we should be investigating the availably of spare rooms with the Minehead membership! Fortunately this proved unnecessary as Danny and the coach drew up 30 minutes after the match had finished. He had waited in Ilfracombe until a mechanic had arrived at 4pm. His diagnostic equipment identified a computer fault, so he reprogrammed the computer and 10 minutes later Danny had been able to set off for Minehead.

The journey home through murk and rain was uneventful and we pulled into Highworth Bowls Club soon after 8pm and another fantastic bowls tour came to an end.

On behalf of all participants I extend our grateful thanks to Frank and Josie Etherington for organising not only this but the many previous bowls tours on our behalf which involve much hard work and dedication. To many members they are the highlight of their season and the organisation is second to none. Frank and Josie are meticulous in ensuring that even with the odd problem such as a dodgy coach computer everyone has a great time and bowlers and non bowlers alike are catered for. Their attention to detail means that everyone is treated as an individual and all of us appreciate everything they do to ensure that an enjoyable time is had by all.