Friday June 8th 7 30 am: driving rain and blowing a gale as we assembled at HBC for the journey to Eastbourne. The prospects were not good. The forecast from the Met Office was dire for the weekend with Saturday likely to be the only day when the weather might improve. As we journeyed towards Sussex the rain and wind continued.

A five second glimpse of a watery sun near Gatwick raised a muted optimistic cheer but a few miles later at the services the rain had resumed as we made a short stop. The journey continued under thick grey cloud, then miraculously six miles from Eastbourne it thinned and cleared to blue sky and sunshine.

We soon arrived at the Albany Lions Hotel right on the seafront still in sunshine but the gale had not abated, if anything it had increased. We dispersed to obtain a light lunch as breakfast by now was a distant memory, and returned to the hotel for 1 pm for the very short journey in the Team Bus to Eastbourne Bowls Club for our first match. We were welcomed by the Eastbourne bowlers who proved to be very friendly but also competitive. 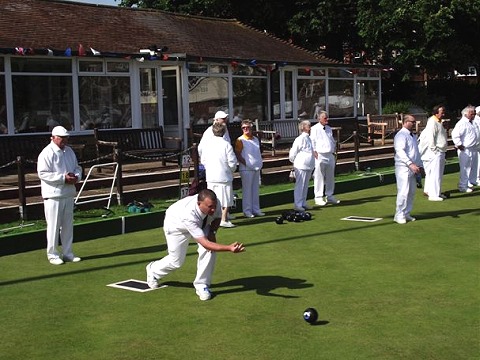 It was a lovely sunny afternoon but the wind became even stronger which presented a real challenge as the frequent gusts were strong enough to actually blow bowlers off the mat as they delivered their woods. The green itself soon dried and bowled well. Getting the weight however was difficult as the wind either held up or accelerated the wood and when it swirled across the green it either accentuated or straightened the bias. Highworth coped better with the adverse conditions however and were comfortable winners.

We returned to our base where an excellent dinner awaited us with some evening entertainment to follow at the hotel. Saturday dawned dry and sunny and although the wind had eased a little it was still blowing a gale. After a superb hearty breakfast we left for the match at Peacehaven and Telscombe Bowls Club which was tucked away but was eventually found. 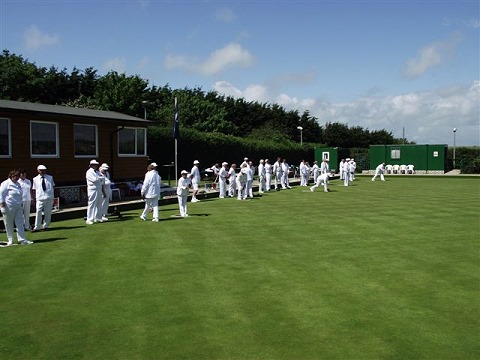 Again we received a very warm welcome from their members and the match got underway. The green again bowled well and the wind was less of a challenge, Highworth again recording a decisive victory. The hotel once more provided a super meal. The food at the Albany Lions was really first class and although the evening meal was a carvery there was a good choice each day and other options such as an excellent steak pie and fish on various nights. The breakfast was particularly good with a wide choice and as much or as little as each person wanted.

By that evening the weather was starting to deteriorate and it clouded over with rain by nightfall. Sunday morning arrived dull cloudy and damp. The rain was light by the time we left for Brighton but continued to threaten. The coach left earlier for Brighton so as to enable members of the party to indulge in Retail Therapy if that was their pleasure at a nearby shopping arcade where they could find shelter from the light rain which had started to fall and the chilly breeze.

Those for whom this activity was not favoured found shelter in various coffee shops and other refreshment premises. There was also an excellent museum down on the esplanade free admission and chairs to sit on which also provided shelter. This was a very interesting place with various exhibits relating to the Brighton fishing industry which is not an activity which most people would associate with this place. Until the mid 19th century fishing was the main occupation and Brighton was just a fishing community. With the arrival of the railways it became a popular venue for day trippers and holidaymakers and the fishing boats gradually became pleasure boats as the town and the holiday trade expanded. There were three videos showing archive films recording this history which lasted long enough to pass the time until the bus was due to leave. 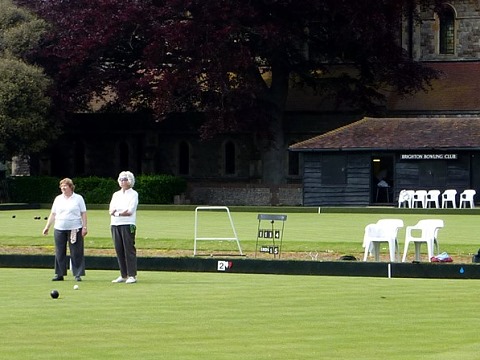 It was raining slightly on arrival at Brighton Bowls Club but the decision was made to start the match which could be shortened if the forecast for heavier rain proved correct. Soon after the start the rain became heavier and it was decided to play ten ends and stop for a small cream tea. During this break it was decided to conclude the match, but soon after this was announced the rain stopped and it was decided to continue. After a couple more ends the heavy rain returned but undaunted we carried on and Highworth secured another victory to complete a hat trick.

During another excellent evening meal the European Monsoon broke over Eastbourne. All through that night torrential rain and wind battered the hotel so it was no surprise to receive a phone call from Arundel Bowls Club before breakfast to say that their green was under water so our final match could not take place. It was decided to return home early stopping at Arundel on the way for a refreshment break. By now the rain had eased at Eastbourne but as we travelled west along the coast road inky black clouds could be seen ahead.

At Arundel it was pouring with rain and parts of some roads in the town were flooded, it was very dark and the deluge continued unabated. Those who braved the rain were able to get some refreshment and returned to the bus somewhat drenched. Soon after leaving Arundel we ground to a halt in what was later discovered to be a 12 mile jam due to the floods ahead. To the left and at a slightly lower level than the road were a number of caravan and camp sites where cars, caravans and tents were standing in extensive floodwater and the torrential rain continued.

Danny our driver eventually managed to extricate us from this jam and we diverted through Chichester. Here we also encountered floodwater across the road and at various other locations as we headed towards home using a circuitous route across country through the heavy rain arriving back at Highworth Bowls Club just after 4 pm.

Despite the weather everyone had enjoyed another very successful Bowls Tour and were already looking forward to next year.

On behalf of all participants I extend our grateful thanks to Frank and Josie Etherington for organising everything on our behalf which involves much hard work and dedication. To many members the Bowls Tour is the highlight of their season and the organisation is second to none. Frank and Josie are meticulous in ensuring that everyone has a great time and bowlers and non bowlers alike are catered for.

Thanks also to David Bailey and Associates (Brian and friends) for the photographs attached to this report.