On Friday 14 June bowlers and supporters assembled at Highworth Bowls Club for the coach to Tenby. It seemed to have been a very short time since we returned from our previous tour to Sussex and the weather was much the same. Cloudy and gloomy with rain threatening but we were as always cheerful.

The rain started as we crossed the bridge into Wales and was soon heavy. As we continued west it began to ease and had stopped by the time we reached Pendine and District Bowling Club.
We were warmly welcomed by their members and were soon tackling a superb buffet lunch which had been prepared for us. As breakfast was by now a distant memory we ensured it was despatched with relish but the quantity was such that some of it had to be dealt with later in the afternoon. By 2pm when the match started the weather was dry and bright but rain was expected later so we pressed on without delay. 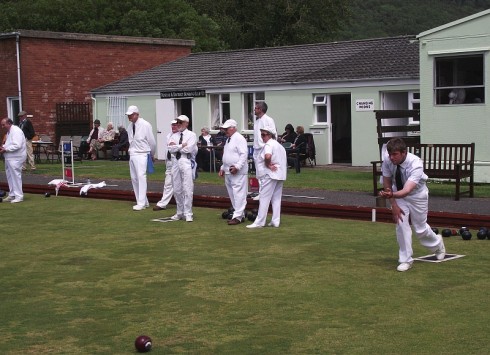 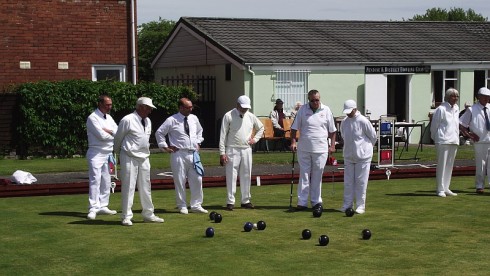 After a friendly but closely contested match Pendine just managed to record a very narrow victory. Perhaps the lunch may have been a factor! As we adjourned to the Clubhouse for a cup of tea and the remnants of the buffet the first spots of rain began to fall. 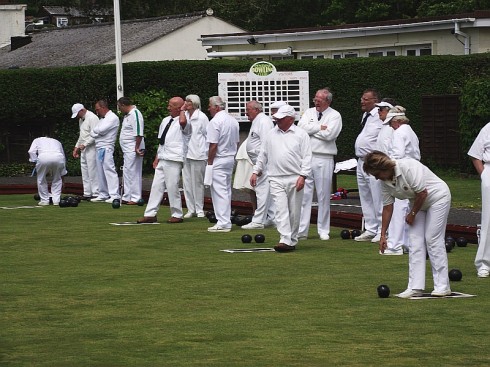 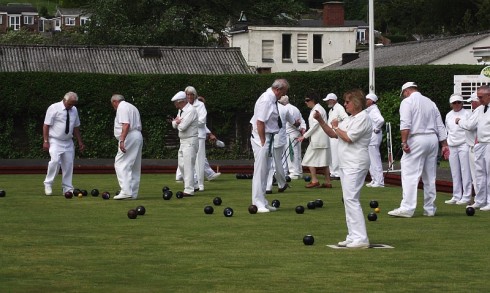 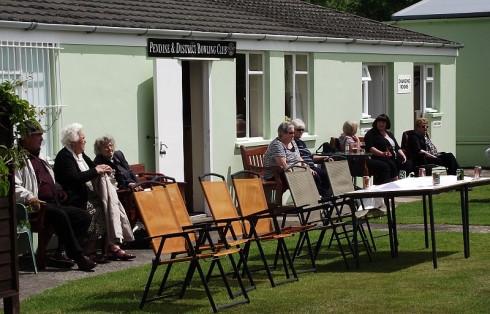 Afterwards we continued our journey to Tenby arriving at the Cliffe Norton Hotel in good time for our evening meal. The hotel overlooked the harbour and beach but the sea view was veiled by heavy rain and mist which had set in soon after we arrived. 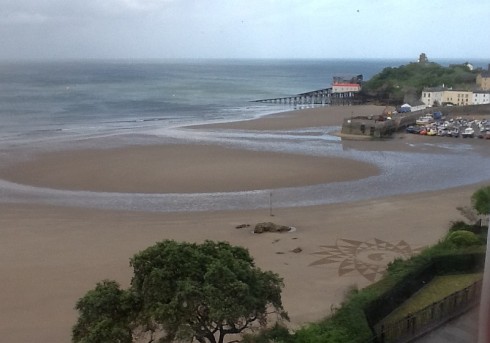 The food was very good and presented to a high standard all evening meals and breakfasts were much enjoyed. The hotel provided entertainment including a singer, a comedienne and dancing on various evenings. Fortunately Friday was one of these so many of our party took advantage of this as the weather outside did not encourage exploration of Tenby that evening.

After a very wet night Saturday morning dawned bright and sunny which allowed us to explore.
Tenby proved to be very pleasant and I thought it reminiscent of Devon many years ago before “modernity” moved in and changed its unique character.

The town itself was quaint with its ancient town walls still very much in evidence, had a variety of small traditional shops with the modern addition of a very small Tesco Express and a Greggs which blended in and did not look out of place. There was also a traditional indoor market and the town had retained most of its older buildings. In front of the hotel were cliff terraces with sheltered seats which afforded excellent views over the extensive sandy beach and bay. All in all I found it a very pleasant relaxing place.

Soon after midday we set off for our second match at Neyland Bowls Club. The afternoon was sunny but with a strong breeze. The match at Neyland marked the first appearance of “The Hairy Bowlers” AKA The Mick Woolmer Appreciation Society (see photos). 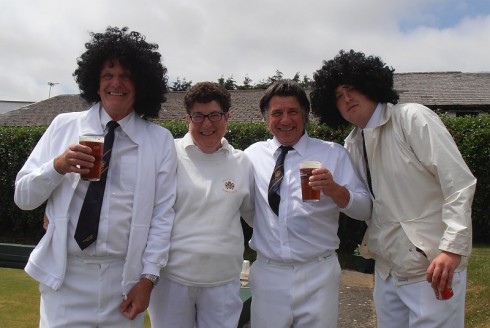 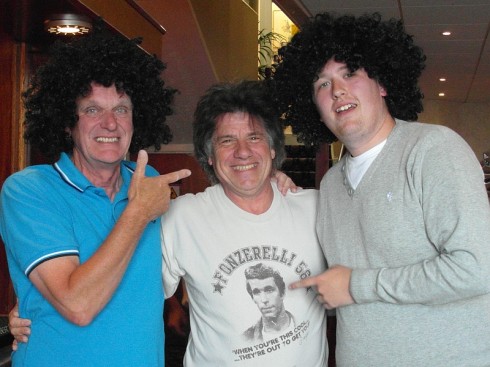 Highworth proved to be the stronger team and we recorded a resounding victory. We returned to the hotel in high spirits and enjoyed an excellent evening meal. Sunday morning again brought rain not an unusual occurrence for a Highworth Bowls Tour. Having faced much worst weather during the 2012 Tour to Sussex we were fully prepared to brave the elements. However a phone call half an hour before we were due to set out dashed our hopes. Whitland Bowling Club had decided to cancel the game. This left us with the prospect of a blank afternoon so it was decided we would visit Carmarthen. We arrived around the time our match had been due to start and by this time the rain had stopped and it remained mostly dry while we were there.

Carmarthen was a mediaeval market town with a castle and the mediaeval street layout still exists. On each street boards tell the history of that particular area and have an artist’s impression of what that street would have looked like at that time. The castle ruins were impressive, built on a promontory they afforded sweeping views over the river and surrounding countryside and would have presented an imposing barrier to hostile armies. There was a museum within the castle which unfortunately was closed as it was Sunday. Closed also were most of the shops which was a pity as they were mainly small and traditional and it would have been interesting to explore them.

One of the old streets had been replaced by modern shops which looked somewhat out of place but as several of these were national chains at least they were open which allowed some retail therapy if desired as an alternative to history.

Near to where the coach parked was an unusual war memorial. Not to the dead of the two World Wars as is usual but to the men of Carmarthen who had died in the Crimean War. It was more detailed, instead of just a list of names it specified in which battle they had died and also indicated those who had died of disease during the campaign. This accounted for almost half of the deaths and made one realise what had to be endured during warfare then in stark contrast to how modern medical advances have improved troops chances of survival during conflict today.

Monday the day of our return home brought warm sunshine and blue skies. We set out mid morning for Bridgend where we were to play our final match. Around midday we arrived at the Designer Shopping Village just outside Bridgend where we planned to stop for lunch.
Finding the way in for a coach was not straightforward due to a weight limit on a bridge within the complex but after going around in circles for a short time entry was achieved. The party dispersed to find lunch or more retail therapy for those who had not already had a surfeit of it.

We then travelled the short distance to Bridgend Municipal Bowling Club.
We were warmly welcomed by the Bridgend Bowlers who were very friendly but competitive.
After a hard fought match Highworth recorded another victory and set off for home in a celebratory mood after another splendid tour. 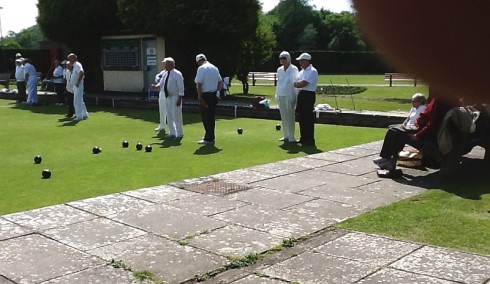 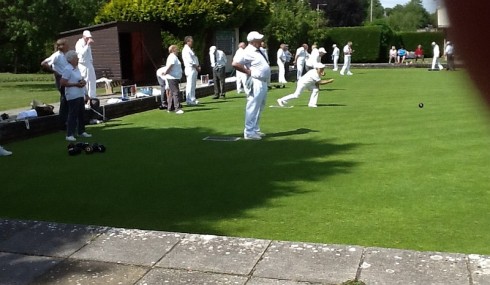 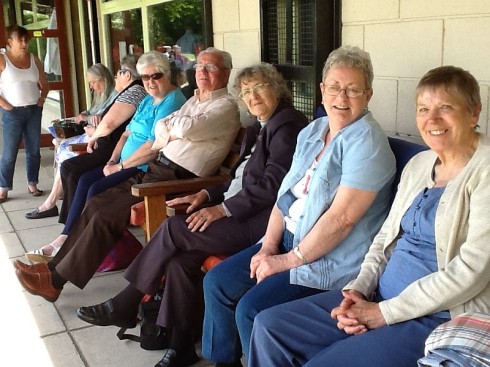 On behalf of all participants I extend our grateful thanks to Frank and Josie Etherington for organising not only this but the many previous bowls tours on our behalf which involve much hard work and dedication. To many members they are the highlight of their season and the organisation is second to none. Frank and Josie are meticulous in ensuring that everyone has a great time and bowlers and non bowlers alike are catered for. Their attention to detail means that everyone is treated as an individual and all of us appreciate everything they do to ensure that an enjoyable time is had by all.
Thanks are also due to Pam Barrett, Helen Mussen and Brian Stallard for the photographs associated with this report.