Friday 1st June saw the arrival of Nottinghamshire’s Wollaton Bowls Club at Highworth on the first stop of their 2018 tour. The green was looking better than it had been since the start of the season and the buffet for their arrival drew appreciative comments from our visitors, but as soon as both sides stepped on to the green to bowl, the one element that couldn’t be organized, i.e. the Highworth weather, began to interfere with proceedings.

Starting with a few heavy drops, the first four or five ends saw increasing amounts of rain fall, but insufficient to call a halt. However, come the seventh end the downpour became very heavy and all parties took shelter in the clubhouse, not to return, as the rain continued to teem down.

With the green starting to flood there was no option but to call the game off. Before Wollaton left to return to their hotel they kindly presented Highworth with a plaque to commemorate their visit and, coming from Robin Hood country, presented Highworth’s captain of the day with a Robin Hood style hat.

Thanks go out to Bob Wilson, Paul Barrow & John Jordan for their work on the green & surroundings in the morning, Elaine White, Paul Barrow and John Spencer for their work in laying on the buffet, along with the subsequent clean-up, aided in the latter by Jenny Wilson and Maggie Jordan.

It is hoped that Wollaton get better weather on the remainder of their tour and that should they come this way again on future tours then they might consider calling in at Highworth again. 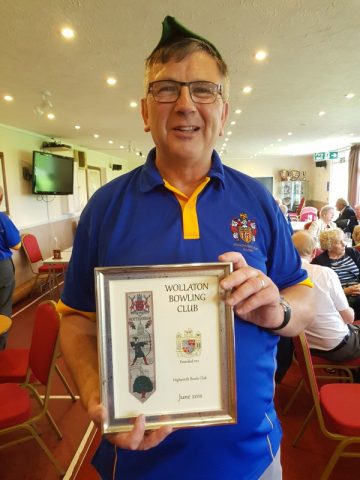