Bowls Wiltshire Ladies made it a double celebration at the weekend when they followed up Saturday’s qualification for the Johns Trophy semi-finals at Leamington by winning their Regional Final of the Walker Cup at Box on Sunday.

This is the first time that BWL have reached Leamington in the Walker Cup.

Highworth’s Deanne Davis and Linda Young played 2 and 3 in the rink skipped by Alison Fail (Purton), recording wins in both sessions. 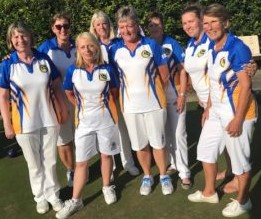 Warwickshire had overcome Somerset in their morning match, but found BWL tougher opposition in the second session, losing out 41 – 36 to the BWL belles, with the scores:
Alison Fail’s rink won 20-13
Alex Jacob’s rink lost 21-23

BWL will now play the winner of the Eastern section on Sunday 18 August at Leamington. Possible opponents are Leicestershire, Northamptonshire or Huntingdonshire (who had beaten Essex in the semi final).

All the best for the Leamington ladies.