Our bowling season runs from around mid-April through to mid-September, and during this time our bowlers participate in a wide range of bowls matches. Once the season gets into full swing there are bowls matches of one sort or another almost every day. 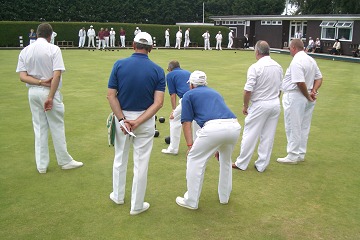 are played throughout the season, normally in triples format and are usually held on weekend afternoons. However, there are occasional Friday evening match on offer too. For beginners, these games provide the first taste of team bowling, playing alongside more experienced bowlers within the club in a more social than competitive environment .

Our location in the north east corner of Wiltshire means that, as well as playing other Wiltshire clubs, we regularly play clubs from the neighbouring counties of Berkshire, Oxfordshire and Gloucestershire.

Highworth’s men’s teams compete in Swindon & District Bowls Associations’ and Bowls Wiltshire leagues and competitions. Bowls Wiltshire league matches are usually played on Wednesday evenings with the aim being to finish in a high enough position to qualify for the knockout competition that takes place once the league rounds are completed. Swindon & District matches take place om Thursdays with a second match occasionally taking place on Tuesdays. There are also men’s team participating n the Monday afternoon Triples league. 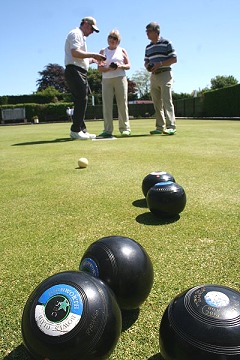 As if this weren’t enough, you’ll often find our bowlers on the green in spare moments, playing informal games or just practicing (we call it ‘rolling up’) – we always try to keep at least one rink free for roll-ups.