The Friday Afternoon Triples League was finally concluded on the last Friday of the outdoor season following a number of weather-forced rearrangements in previous months. Whilst the competition was drawn out, the winners weren’t, the destination of the trophy decided weeks earlier, thanks to an unblemished record of 14 wins from 14 rounds.  So it’s a belated well done to Team ‘B’ comprising Heather Pollock, Bob Clements, Simon Cove and Andrew Wicks.

Whilst there are no records to confirm it, it is probably a first for the Friday League that a team has gone unbeaten through the competition,

Thanks should go to John Spencer for organizing the event

Picture shows Andrew, Bob & Heather receiving the trophy from John. Thanks to Ashlee Lin for the photo. 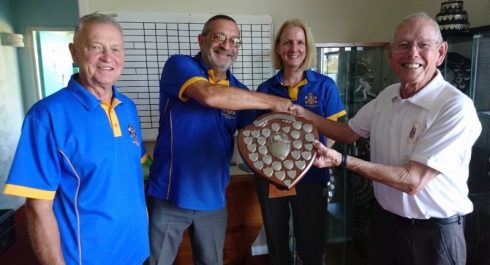 HBC’s ladies went to Westlecot to compete in four finals and came away from the day’s events 50% successful. Joanna Hicks missed out in her Champion of Champions decider whilst Linda Young retained her 2-Wood Singles crown for the third successive year.

In the Charity Triples, the combination of Sue McCormack, Ashlee Lin and Deanne Davis found the Purton trio skipped by Alison Fail just too good on the day,

Linda made it a double for her day when she skipped Maggie Jordan, Deanne and Jo to victory over a Charlie Godwin skipped team from Wootton Bassett in the Fours.

Congratulations and commiserations in equal measure then but there’s promise of more to come in future.

Highworth were well represented on the first day of this year’s S&D Finals Weekend, held at Shrivenham, with seven titles up for grabs. In the Under-25s it was Highworth vs Highworth with David Murray facing off against Sean Etherington and David taking the spoils. Mark Richman maintained his hold on the Officers’ Trophy, winning it for the fourth consecutive year,

Disappointingly, that was as good as it got, title-wise, so it was commiserations and the runners-up spot for HBCs other participants.

However, all are to be congratulated on getting to the finals in the first place and hopefully, next year, they can go one better.

So, it is over to the ladies for Sunday’s finals.

The 2019 Club Competition Finals were held on the weekend of 7th & 8th of September.

Congratulations to all the winners, commiserations to the runners-up, and many thanks to Competition Secretary Stuart Murray and all who organised, assisted, marked or supported the events over the weekend. 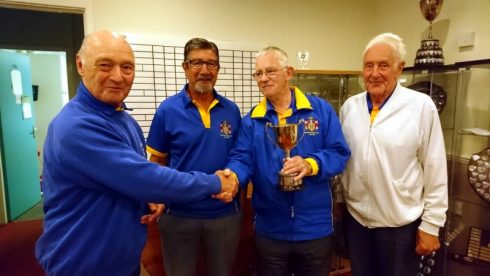