The triple representing Highworth played four games on the way to the final beating teams from Supermarine, Pewsey Vale, Purton and Swindon North End before ending their campaign with a dominant display against a strong team representing Avon Bowls Club of Melksham.

This is the first time the club has won this trophy since its revision in 2011 to a mixed format. But, exisiting club members Trish Pearce and Linda Young were members of the winning ladies triple in 2003 our only previous visit to the final.

Congratulations to Linda Young who was runner-up to Marcia Easton of Avon Bowls Club in the County Final of the Champion of Champions Singles.

Supermarine Bowls Club held their fifth annual afternoon triples tournament during the month of September which was won this year by the team from Highworth Bowls Club consisting of Stuart Murray, Deanne Davis and Chris Davis, with sub John Jordan covering for Deanne in the last group game.

In their group Highworth beat Covingham Gents (Supermarine) twice and Rodbourne also twice to top the group. In the Semi-Final they were unfortunate to have to play Rodbourne again who had finished as best runner up of the three groups.

In the final our team ‘The boys and Her’ came up against the Tangerines who comprised Kevin Mitchell and John Ramsay of Supermarine, good friends of our club, who were skipped by our own Hugh Linning.

Highworth managed to hang on after a great fightback from the Tangerines to lift the trophy retaining it for Highworth as it was won last year by Chris Mussen, Roy Read and John Jordan.

It was a good day for Highworth men at the Swindon & District Mens finals held this year at Shrivenham Bowls Club.

In the Officers Cup Men’s Captain Stuart Murray overcame stiff resistance from Barry Romain of Stratton Churchways to edge a high quality singles match when scoring a 3 to close out the game from 18-18.

The triple of Shaun Higgs, Tom Pittuck and Gary Willis did excellently to win three rounds before narrowly losing in the final to a triple from Wroughton Bowls Club.

The day concluded as always with the Eddie Wells Trophy Final. Particularly poignant this year as Eddie who previously played at Cricklade Bowls Club passed away earlier this year.

The competition is played by four triples over 18 ends and this year followed the revised National format of ‘two bowls’.

The final proved a close contest in the early stages with the Strattton Churchways team proving strong competition for Highworth. However, Highworth gradually took the ascendency winning on two rinks, drawing on a third and conceding a narrow loss on the fourth.

Congratulations to all players who took part in earlier rounds against Supermarine and Wroughton and to the following players who made up the Championship team.

There was significant representation from Highworth in the finals of the Swindon and District ladies competitions held this year at Westlecott Bowls Club.

First up for Highworth in the Pairs were Deanne Davis and Ashlie Lin who narrowly lost to past National Triples Champions Chris Mitchell and Alison Fail from Purton Bowls Club.

Next up in the Fours were the quartet of Maggie Jordan, Josie Etherington (sub for Linda Young), Deanne Davis and Jo Hicks who had a comprehensive 29-10 win over a rink led by Julia Hunt from Wanborough Bowls Club.

More success followed in the afternoon as Deanne Davis took to the green again against Yvette Maxwell-Darkes of Royal Wootton Bassett Bowls Club in the Ladies 2 Wood Singles. After a very exciting and close game, Deanne finally triumphed on an extra end.

The concluding Final for Highworth Ladies saw the Triple of Maggie Jordan, Josie Etherington (sub for Linda Young) and Jo Hicks take on 2017 National Triples Champions Chris Mitchell, Julie Jones and Alison Fail from Purton Bowls Club. This game ebbed and flowed with the Highworth trio finding themselves up against it at first being 13-1 down, however they showed real grit and turned the tide to be one up with one to play but sadly the experience of the National champions saw them take 2 shots on the final end to claim victory. 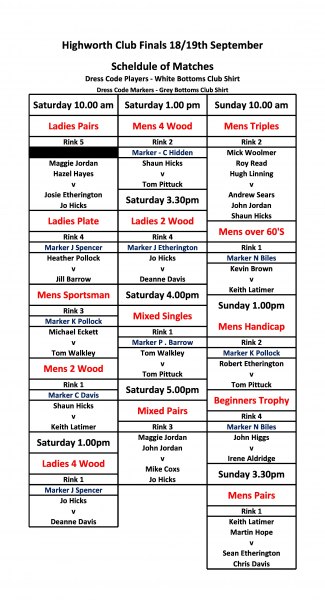 Congratulations on Highworth Bowls Club on Reaching The Semi Final of the Mixed Double Rink .

Highworth officers Reach Semi Final of Officer’s Triple’s on Friday Evening Beating Purton Bowls Club  20 – 6 after 14 Ends they now face North End Bowls club on there last Step before the County Finals on Sat/Sunday 11th & 12th September . Congratulation to Joanna Hicks , Chris Davis and Stuart Murray. Let’s show them support in the Semi Finals as a club when it is played at Highworth Bowls Club Date to be Arranged before the 5th September.

Highworth Bowls Club have now had 5 League 6 League Matches Since the start of the season . 3 in the Wilts League , 2 in the S & D and 1 in the Wilts 3 Rink League . On a whole Highworth B.C have had an excellent start to the 2021 Campaign. Having won 5 and lost 1 . We have defeated Salisbury and Avon in the wilts League whilst Suffering our only League defeat of the Season to Westlecot B.C in our last fixture. In the S & D we have defeated both Supermarine A and Royal Wootton Bassett A .Also in the Wilts 3 Rink League which we Joined in the 2021 season we have played the one game Against Stratton Churchways which we narrowly got a victory I would like to say well done to all the players who have put them selves forward for selection and welcome all other players who wish to make themselves available please put your names down on the selection sheets .