It was always going to be a hard task to reach the final of the men’s Wiltshire 4-rink competition, but having surprised Holt last weekend to reach the semis, Highworth found the task of dislodging Royal Wootton Bassett, in their semi-final clash at Westlecot, a mountain too high, going down 59 – 95. 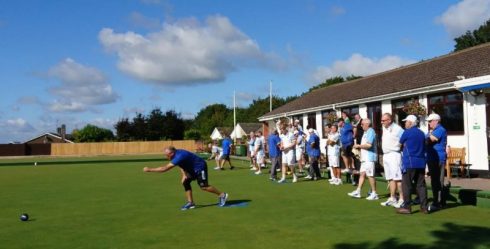 A huge well done to HBC’s men who went to Holt and pulled off a win in their Wiltshire quarter-final play-off match.

Three winning rinks and a narrow loss on the fourth saw the guys record a 79 – 69 win.

Wootton Bassett now await in the semi-final to be played on Sunday 1st September, venue to be confirmed.

Congratulations to Rob Etherington, who has made his way through to the Champion of Champions Final at Westlecot on Saturday 14th September, where he will face Barry Pittuck of Town Gardens.

Adding to the Highworth finalists will be Chris Mussen, who has won his way through to the Over 60’s Singles final on the same day. He will be facing C. Thomas of Garrards or J Thomas of Westlecot. Well done Chris!

Joining them will be Mark Richman, who will contest the S&D Officers Cup for the 4th consecutive year. His opponent is yet to be decided, but there is the opportunity for a second all-Highworth final when Stuart Murray takes on Purton’s Paul Boyles.

Also qualified is David Murray, who beat ex-HBC player Ben Choules in his semi, to make it an all HBC S&D Under-25s final playing against Sean Etherington.

Well done one and all and good luck to you all on Finals day.

Congratulations to Sean Etherington on making it to the Swindon & District Under-25 Final for the second year running. Sean beat Highworth old boy James Richman in their semi-final at Highworth, winning 19 – 10.

In the final, to be held on Saturday 14th September, he will meet either David Murray, in what would be an all HBC final, or another Highworth old boy in Ben Choules, to whom Sean lost in last year’s final.

Commiserations to both Jo Hicks & Linda Young whose involvement in separate competitions was ended early in both cases.

Jo, partnering Georgina Newman (Avon) in the Under-25 Pairs, lost out to a pair from Northamptonshire in the first round, whilst Linda’s involvement in the Senior Singles got only as far as the second round.

Hard luck ladies, but in getting to Leamington in the first place is an achievement to be celebrated in itself.